It's been dark around here, I'm not going to lie. I have friends whose ability to stay tethered to this dimension seems fragile and full of pain, the pain of lusty, unhinged cells replicating and replicating. Just as they seem to become full of something Not Themselves and slow of pulse and breath after so much quickening, do I become leaden, full of bile and blood. I feel like rot watching my friends be sick.

I myself am enduring one of many detoxes. I am in a some kind of perpetual withdrawal state--kicking one chemical after another in an attempt to relieve my own constant neuralgia, being prescribed cymbalta, vicodin, gabapentin, lexapro; getting rolfed and massaged and acupunctured and just generally torturing myself at the gym. I am in a state of pain I'm confident would be solved by opiates, and indeed, they bring such a sweet relief it's almost ridiculous. Like, why aren't we all on opiates?

I watched the Peter Weller documentary about William Burroughs, a man I had the good fortune to meet not once but twice, and actually spent an afternoon with. Peter Weller comes off as the biggest kind of art douche, but Burroughs? My kind of guy. I was heartened to hear that he struggled with dope til the end. Not in some kind of schadenfreude way, but because I struggle with dope now and again. It's a solution to a lot of things. I was a heroin addict in my twenties and on methadone for nine years. It has a way of changing you. Or rather, I came to it because I was already changed, I was already awash in some other stream, one that neither parallels nor crosses the so-called "stream of life," one that creative people seem to wade and occasionally drown in. Burroughs was so charming. You can be charming on dope, junk, to use Burroughsian vernacular.

In my neurochemical jazz fest, the one that's happening in my brainy parts right now, I recall Burroughs coming to the book shop I worked at. I ran in a crowd that worshiped him. We both did and did not understand his genius. It's taken me years--getting older does that, you ripen, your memory cells accommodate and imbricate information in gratifying ways. Stanislavski, the great actors' teacher calls it Emotion Memory. You overlay and shape memory with your new experiences, archiving and adding like a hypermotile librarian in the Strand Bookstore of your brain. Burroughs came to Lambda Rising, in Dupont Circle, where I was employed as a cashier/book seller/only one there. We carried his books in 1980 to be sure, but they didn't sell. Nope, gay men bought sad, horny romance novels by Gordon Merrick, and Inches and Blueboy. Not Genet, not Burroughs, not even Rechy. There I was, all New Wave-punk lesbo behind the cash register, reading Fleur du Mal and Seasons of Hell, Naked Lunch and Queer, all written by homosexual geniuses. You can imagine the attitude I was handing over with your change.

Burroughs came upstairs to do an impromptu reading. It was wonderful. Four of my besties and me alone, hanging on to Bill. He was polite and unconcerned by what  for me spoke to the general state of the gay male industrial complex--that it routinely sacrificed its most hard-won gifts for tawdry emotional appeal, in art, in literature, and most obviously in music. Of course this is true of another kind of 99%, right, the regular ol' world, the other 1% of us having been "blessed" with no discernibly useful talents except for making art. But Burroughs brought something real to the table. While the queers were buying poppers and jack mags--and why not!?--Jane and Paul Bowles, Verlaine, Barnes and Proust were getting thumbed by yours truly, who would then "sell" them back to the bookstore as "used." Oh, there's another financial amend I owe. Fantastic.

Burroughs didn't seem to need gay approbation, and why would he? He wasn't Lambda Rising Gay, then a mixture of 70's clone (hoodie in jean jacket, moustache, aviators )--he was his own thing--but my favorite part of meeting him was when he sent down his Aryan amanuensis James to ask "if it was okay if Bill took some magazines home." And sure enough, when they left, Burroughs carried a paper sack stacked with Numbers, Inches, Colt, and Honcho that I had packed up for him myself, secretly dreaming an unseen dream of being someone, something, that William Burroughs might jack off to.

Maybe we didn't shoot our wads together, but possibly that night, William and I might have shot other things, in hotel rooms, basements, rest rooms. I met him again with John Waters. I would never want to be the man John Waters would jack to, but I admire him just the same. They both articulate the life of men who cannot be anything other than themselves. Iconoclasts. Heroin had Burroughs. It was a love affair that lasted his entire life. What heroin, addiction in general is to me, is a way of grinding myself to my body. I haven't tasted dope since 1993 but I know its smell, I can conjure it any time. I want to curl up behind Burroughs, my thick torso and gloppy belly smashed against his sticky bones, the filo dough of old man skin wrapped around a skeleton. Poppies in your ear man. Burroughs left poppies in my ear. 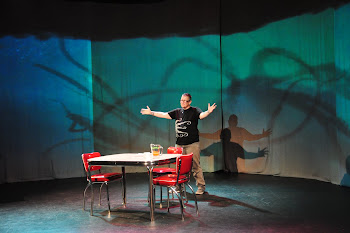 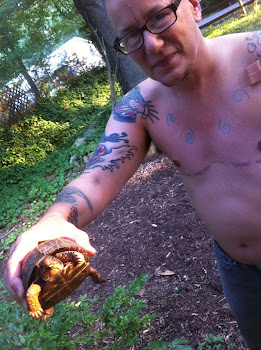